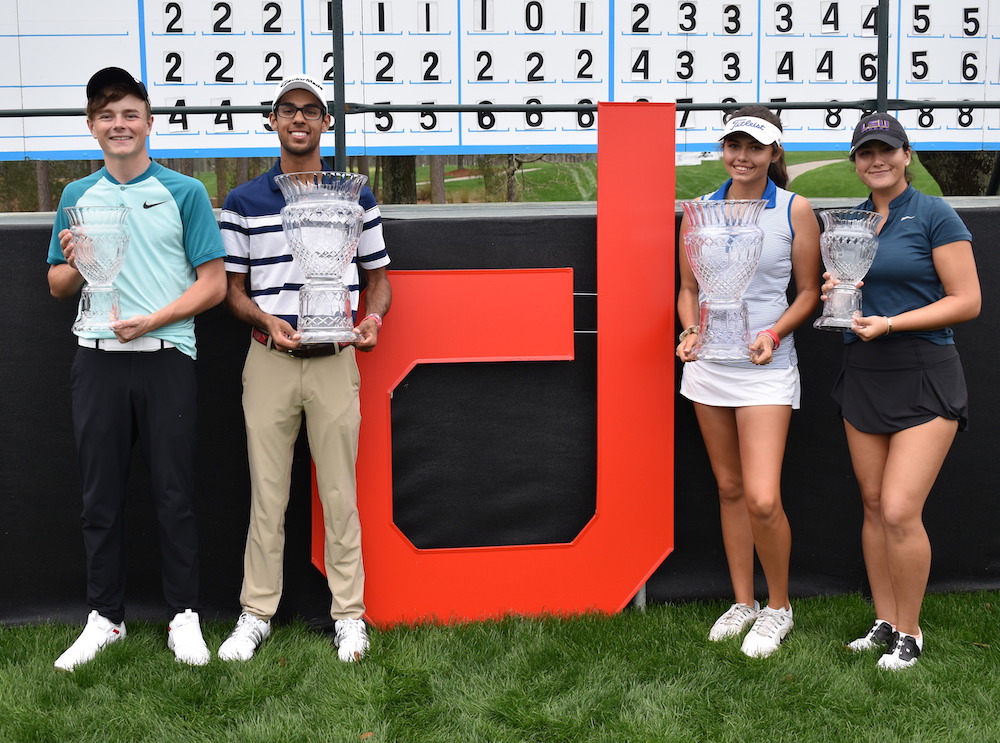 Bhatia (Wake Forest, N.C.), who entered the final round with a two-stroke advantage, shot 33 on the front nine, staking the 17-year-old North Carolinian to a commanding leading. He fired a 3-under par 69 on the day and finished the tournament at 10-under par, 206, six shots clear of second place Luke Clanton (Miami Lakes, Fla.).

The course played just under 7,000 yards for the Hackler tournament, just as it does Dustin Johnson World Junior Golf Championship.

This was Bhatia’s fourth appearance at the Dustin Johnson World Junior Golf Championship and his performance has mirrored his meteoric rise in the game. He finished 10th in his first two appearances and second in 2018.

Pano’s victory makes her the first player – boy or girl – to win the Dustin Johnson World Junior Golf Championship twice, and she coasted to victory. Just 14 years old, Pano (Lake Worth, Fla.) entered the final round with an eight-shot lead.

She played the opening nine in even par, never giving the field a glimmer of hope. Pano shot a final round 71 and finished at 7-under par 209, easily besting her own tournament record of 218.

Pano has played in the Dustin Johnson World Junior Golf Championship twice and been the leader at the end of all six rounds she has played.

Latanna Stone (Riverview, Fla.), a LSU signee, finished the event at 5-over par, good for a second-place finish. Jensen Castle (West Columbia, S.C.), who will be playing for the University of Kentucky in the fall, was a stroke behind Stone in third.

The Dustin Johnson World Junior Golf Championship is a 54-hole college style event that has quickly grown into one of the top junior events in America.

With Johnson’s support, the tournament provides players a PGA Tour-like experience, and the opportunity to test themselves against a premier field.